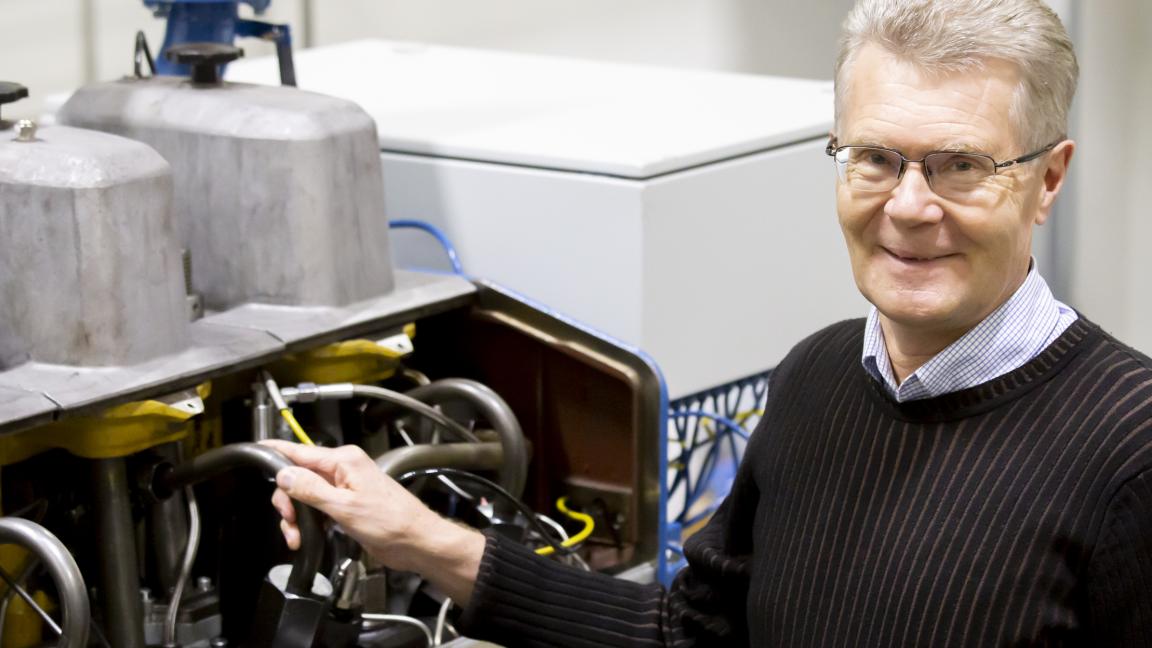 Researchers in energy technology at the University of Vaasa are developing a flexible fuel handling system, particularly specified for a hydrogen-driven marine engine.

The research is part of the EU-funded CHEK project led by the University of Vaasa. The ambition of the project is to reduce greenhouse gas emissions by 99%, while achieving a reduction of energy consumption by at least 50%.

– Burning hydrogen does not generate gaseous carbon compounds, nor particulates. Hydrogen can be burned using high excess air meaning that the emissions of nitrogen oxides are almost negligible. Hydrogen can be produced using renewable energy. The use of hydrogen in marine propulsion reduces the carbon footprint of marine transport, says professor Seppo Niemi from the University of Vaasa.

The CHEK consortium, led by the VEBIC, University of Vaasa, has published its first technology outlook. The project will develop two customized vessel concepts: a wind-powered bulk carrier and a hydrogen-powered cruise ship equipped with innovative energy technologies. The aim of the project is the development of two bespoke vessel designs – a wind energy optimised bulk carrier and a hydrogen powered cruise ship – equipped with a combination of innovative energy technologies working in symbiosis.

In this project, the University of Vaasa has analysed, what kind of engine technology enables the use of pure hydrogen as fuel. Researchers have also studied, what kind of fuel system is required for hydrogen in marine applications, which safety and other requirements the system must fulfill. Now they are preparing to build a hydrogen fuel system for VEBIC research laboratory.

– In the future, we will use our hydrogen fuel system in engine research but we also develop the fuel system in accordance with the gathered experience, says Niemi.

The flexible fuel handling system focuses on the design and location of hydrogen tanks, pressure reduction, closing valves, pipelines and safety-related issues and aspects. In this way, clear instructions will be provided on how to build a safe fuel-flexible handling system for marine applications, primarily intended for hydrogen and also serving fuel cells.

– Collaboration between project partners has been excellent. Project beneficiaries bring together their own expertise and viewpoints.  As an example, developing the hydrogen fuel system requires collaboration between project partners University of Vaasa, MSC Cruises, Wärtsilä Finland and Lloyds register. I have felt, that this collaboration has worked well and is vital in achieving the goal of the work, says researcher Maarit Mäkelä, who is leading the development of new energy technologies in the project.

Techniques and fuel costs in a comprehensive review

In addition to the flexible fuel handling system, an aerodynamic design and specification for a Wing Sail has been developed in the project. Moreover, the optimization and testing of a Waste heat recovery (WHR) system will improve the understanding of system and component behaviour under the future vessel specific operating points on component degradation and performance.

The project has conducted a report on potential benefits from the combined use of on-board energy storage systems and cold ironing and these benefits have been calculated over the expected operational profiles of both concept vessels.

A preliminary design of the Air Lubrication System (ALS) applicable to each of the target vessels has been completed as well. CHEK provides information to the ship owners/operators of the indicative space, power and service demands associated with the installation of the ALS. The ALS preliminary design also provides direct input as to the auxiliary power demands aiding with design of integrated power systems for each vessel. This permits a better understanding of the total power regime required for each vessel. Complementary ultrasonic antifouling is used on the hull, propellers, and the so-called niche areas of the vessels. This avoids the growth of algae and mussels, which has a positive effect on flow efficiency and ultimately on fuel consumption. At the same time, the spread of invasive species is prevented.

Besides the various technologies developed in CHEK during this period, the supply costs of the fuel options considered in the project have been compared and a review of shipping GHG business models suitable for implementing energy saving devices on vessels has been conducted.

Additionally, a new methodology for benchmarking GHG reductions taking considerations of all systems, sea trials and operating profile has been proposed along with associated processes to implement it and, in this way, provide a validated prototype from which a real-world solution can be developed and deployed.

In the coming six months CHEK will continue to develop its technological options and make preparations for the deployment of decarbonisation technologies for its real vessel demonstrations. The CHEK vessels will start sailing around the end of 2022, and will have completed their journeys by 2023. Project CHEK is expected to be completed by June 2024.

Read more
Hydrogen and wind for the vessels of the future – significant EU funding for the University of Vaasa for low-carbon shipping research
CHEK - deCarbonising sHipping by Enabling Key technology symbiosis on real vessel concept designs
Did you like the article?

Read more about this topic
hydrogen