Openness and publicity make research science that is accessible to all.  For research to have an impact, it must be disseminated, i.e. the most relevant content and the most appropriate ways of presenting it to a specific audience must be chosen. Communicating science is therefore part of a researcher's professional skills.

The University's prize jury points out that science communication is particularly relevant and valuable today, with the increasing amount and variety of misinformation and the ways in which misinformation is disseminated.

Science communication is a two-way dialogue

Professor Panu Kalmi, the winner of the University of Vaasa's Science Communication award, has communicated the results of his research and research projects in a persistent, active and understandable way.

In his research, Kalmi has emphasised the importance of financial literacy as a civic skill, especially among young people. He has brought the subject closer to the everyday lives of children and young people, for example through gamification.

According to the jury, Kalmi has successfully and interactively communicated science and research through several media interviews, Twitter, his "Taloudesta ilman kyyneleitä" blog, podcasts and many different science events.

- Science communication is about much more than just communicating research. It's also about networking, sharing knowledge and making science a daily part of life. It is important to know how you can serve the society around you and how you can best participate in your partners' projects," says Kalmi.

A total of 34 researchers and teachers from the University of Vaasa who took part in the new Vaasa Science Carnival (Vaasan tiedekarnevaalit) were awarded an honorary mention for their excellent science communication.

The Vaasa Science Carnival took place in November 2021 for the first time. It is a large-scale science event for the general public, involving all universities and universities of applied sciences in Vaasa and Svenska Litteratursällskapet.

The science carnival hosted a total of 45 hours of discussions and presentations on recent scientific findings and interesting research projects, both on-site in Vaasa and streamed online. The aim was to showcase high quality research done locally to solve global problems.

- We appreciate that so many of our researchers came to this new event to share their research with a wider audience, says Rector Kuusisto.

Photos from the Vaasa Science Carnival: 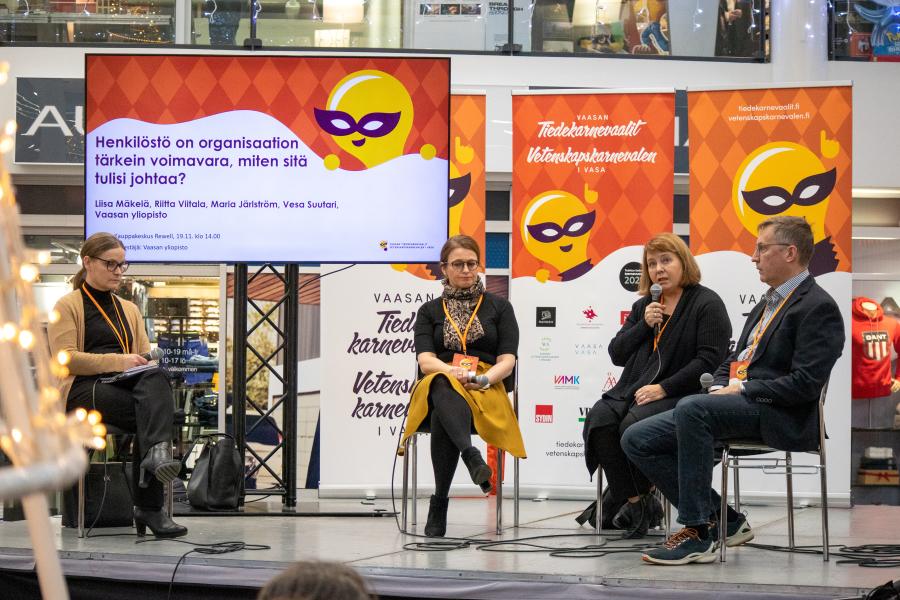