What kind of biomethane liquefaction processes would be suitable for Ostrobothnia? - The feasibility study was completed

Published 12/15/2020 - 12:58
Research
Collaboration and services
The University of Vaasa has completed the techno-economic study of biomethane liquefaction processes. Five liquefaction technologies best suited for small-scale production were selected for technical analysis, for which the report presents process descriptions and reference plants from around the world. In the economic study, the most advantageous life cycle costs were obtained for mixed refrigerant processes based on the reverse Rankine cycle.

One of the goals of the Biogas Utilization Opportunities in Ostrobothnia Region –project, implemented by the University's Renewable Energy Research Group and the VEBIC research platform, was to study the feasibility of a new regional liquefied biogas infrastructure in Ostrobothnia.

Reducing greenhouse gas emissions from the atmosphere and replacing fossil fuels with renewable fuels play a key role in Finland's and the EU's climate goals. Biogas can play an important role in achieving these goals. To make the use of biogas a realistic option, e.g., for heavy road transport, the supply of liquefied biomethane (LBM) in particular needs to be significantly increased. LBM is also well suited as a fuel for short sea shipping. Energy density is high, and in addition to greenhouse gases, emissions of sulfur, particulates, and nitrogen oxides are reduced.

The major challenge for biomethane liquefaction is the scale

Knowledge of liquefaction processes and refrigeration cycles is mature since it has been implemented in LNG plants for decades. However, the liquefaction of biomethane differs from LNG solutions primarily in terms of scale.

– The development of infrastructure is slowed down, especially by the technical and economic challenges associated with small-scale production. The key to the successful optimization of a small-scale liquefaction project is to find an appropriate balance between technical, operational, and economic characteristics, says project researcher Kirsi Spoof-Tuomi from the University of Vaasa.

According to Spoof-Tuomi, when weighing up the technical, operational and economic characteristics, at least the process simplicity, easy operation and maintenance, and process safety should be kept in mind in addition to process efficiency and low costs. Moreover, the refrigerant availability and equipment space requirements should be considered. Also important is the technology maturity and reliability, and scalability so that the size and capacity of the plant could be easily increased if needed.

Spoof-Tuomi says that these goals were paid attention to when the five liquefaction technologies best suited for small-scale production were selected for the project report. In addition to process descriptions, the report presents examples of existing biomethane liquefaction plants based on these technologies, both in the Nordic countries and more widely in the world. Available commercial solutions and equipment suppliers were also reviewed.

In the economic part of the study, the costs of different liquefaction processes were evaluated and compared using the life-cycle cost (LCC) model, which is a useful tool for analyzing trade-offs between investment costs and future operating costs to get minimum total expenses during the project's lifetime. From an economic perspective, the Rankine cycle with mixed refrigerant appeared the most advantageous option for the small-scale liquefaction process.

To further compare the different processes, the Levelized costs of liquefaction were defined for each process in €/MWhLBM. The Levelized cost of liquefaction also represents the average revenue per unit of LBM produced that would be required to cover the initial investment and the operating expenses over the project's expected lifetime. Finally, sensitivity analyses were performed to provide a broader view of the economic assessment results and address uncertainties related to investment costs and future expenditure flows. The case study was based on the existing biogas production capacity in Ostrobothnia.

The Biogas Utilization Opportunities in Ostrobothnia Region -–project started on 1 March 2020 and will end on 28 February 2022. The total budget of the project is more than 314,000 euros, of which external funding accounts for more than 269,000 euros. The project has received funding from the European Regional Development Fund (ERDF). 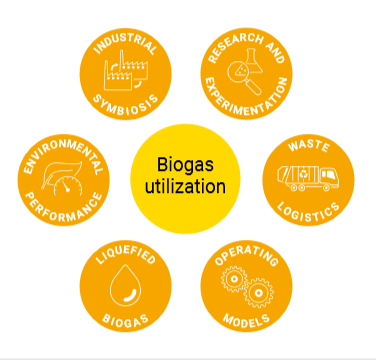 Research: New Occupational Safety and Health Act has given more responsibility to Finnish workplaces — only the most serious violations and crimes against occupational safety regulations go to court
07/13/2021 - Research